The Nigerian Customs Service, Onne Ports Command has warned the public against the consumption of the disposed frozen chicken at a dumpsite along the Eleme section of the East – West Road, in Ejamah Ebubu, saying the birds are not good for consumption.
Recently a large population of people were seen excavating frozen chickens from the dump site where the Nigerian Customs officers disposed ten containers of imported frozen chickens and turkeys.
Eye witnesses at the scene expressed fear that the excavated contaminated birds may end up in the market as frozen foods and will be sold to the unsuspecting members of the public.
Speaking to the media in her office the Public Relations Officer of the Nigerian Customs Service, Onne Command, Eunice Nwaja said that the 14ft Container loads of chickens were destroyed with the assistance of the National Agency for Foods and Drug Administration and Control (NAFDAC) because it was found that the preservatives used for the chicken were the same used in embalming corpse.
According to Nwaja, “It is contaminated contraband good; therefore, not good for human consumption”.
She maintained that, “We have been advising the general public that the birds are not good, and that the chemicals used for corpses were used for the preservation processes, making the birds unfit for human consumption”.
Nwaja observed that consumption of contaminated birds could be advanced as one of the reasons there is high rate of cancer in the country.
The Customs spokesperson warned that the service has mobilized security officers to protect the dumpsite; stressing that the Customs Command will arrest and prosecute anyone who tries to excavate the poisonous frozen chickens from the dumpsite.
“We have been telling them that this thing is not good for human consumption but they will not understand”, she lamented.
“The truth is that we have taken the birds to the laboratory and we found out that it is not fit for human consumption,” she revealed.
“If we catch anybody there, we will punish the person so that others will take precaution,” she threatened.
Residents in Ebubu and Onne said that the birds were not properly disposed, and that the Customs Service erred by dumping contaminated birds without seeking permission and advice of the landlords and local residents. They queried why Customs should dump such dangerous contrabands in someone’s land without his consent and at a place, and in a manner that is easily accessible to the general public in the face of biting poverty, crushing joblessness and acute frustration? They are wondering what will happen to under-ground waters in years to come as result of the dump. The landlords in collaboration with Eleme Research Foundation (a nongovernmental organization) are already contemplating legal action to force Customs to clean up the polluted environment now and protect their land and underground waters from further pollution arising from the dumped birds.
Our investigation revealed that it is the same chemical known as formalin (formaldehyde) used for fixatives, (i.e. embalming dead bodies), which was recently used to brew the killer kaikai that was used to preserve those birds.
In the meantime, Press Secretary in the Rivers State Ministry of Health, Mr. Paul Bassey said efforts are being intensified to mop up the frozen chickens that were imported by fraudulent businessmen from circulations.
Mr. Bassey warned the general public from buying birds at low rates from the markets.

Posted by Ollorwi Osaro at 02:59 No comments:

INSECURITY IN ELEME: THE TASK BEFORE J. O. 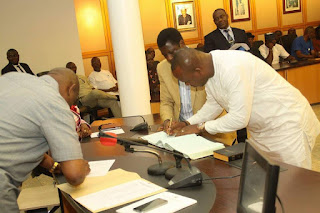 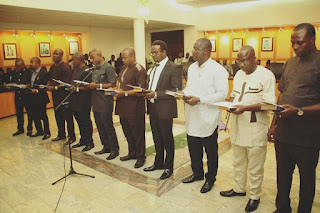 Posted by Ollorwi Osaro at 02:51 No comments:

Police Declare Zero Tolerance for Crime in Eleme
The new police boss in charge of Eleme Divisional Police Headquarters SP Harrison Akpoguma has declared zero tolerance for those instigating insecurity and other societal ills in Ebubu.
The DPO made this known during his familiarization visit to Egbalor Ebubu on Wednesday, 4th November, 2015.
He called on the people to partner with him in achieving this goal, promising to promote synergy with the citizens and residents for the development of Ebubu in particular and Eleme in general.
According to Akpoguma, his office will partner with all stakeholders in providing security to Ebubu inhabitants by seeking the cooperation of all the stakeholders through provision of relevant and timely information.
The police boss is however not new to the security challenges in Eleme as he disclosed he faced similar situation in Port Harcourt and prevailed.
He therefore assured the citizens of Eleme of his resolve to stamp out criminals and social vices, and appeal to the public to provide the police with useful tips about hideouts of bandits and criminal elements.
He however emphasized on community policing as a duty call to all inhabitants of Ebubu, which he said the “citizens are major players”.
In achieving this aim, he emphasized the importance of citizens to always supply the police with valuable information on crime and criminals before they strike so as to enable the “police to check crimes in the bud. By so doing we will together prevent crimes by deterring criminals, thereby ensuring a safe and peaceful society”.
Earlier, the Secretary of Egbalor Council of Traditional Rulers, Chiefs and Elders, High Chief Julius Okereke thanked the DPO for the visit, especially for his efforts towards the maintenance of peace and protection of lives and properties within the short period of assumption of office in Eleme.
Okereke, while commending the police for their “rapid response to our distress calls”, called on the police boss to facilitate the provision of a police post in Egbalor.
He decried a situation where known criminal suspects are arrested and released almost immediately, allowing them to boastfully regrouped and visit more mayhem on the entire community.
Chief Okereke emphasized on the need for the police to protect both the informants and information given to them; and to ensure diligent prosecution of criminal suspects.
The visit which is the first by a DPO in Eleme in recent times was well attended by a cross section of Traditional Rulers, Chiefs, Elders, Opinion Leaders, Women and Youths of the community. 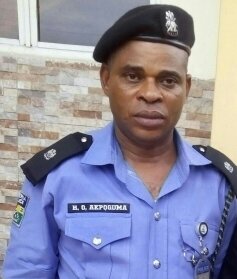 Posted by Ollorwi Osaro at 00:16 No comments: